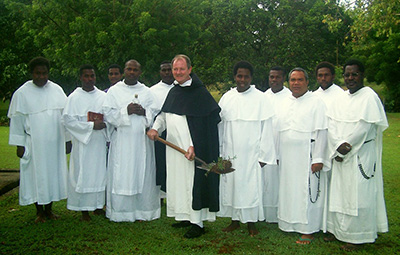 All his life, our holy Founder was aflame with the desire of spreading the Gospel among other cultures and peoples. If he never experienced this joy personally, he has none the less experienced it abundantly through the missionary labours of his Order. He passed this missionary spirit to his disciples who undertook the task of preaching the Gospel in other lands. The whole world has heard the words of Dominican missionaries, and there are few lands that have not been sprinkled with their blood.

St. Dominic himself sent out the first group of missionaries of his Order, St. Hyacinth of Poland and his companions. Since then, as successively new lands became known, the stream of Dominicans leaving their homeland to preach the Gospel beyond has never failed. Many of the old missions have become provinces in their own right and in turn have sent out missionaries to other lands.

In fact, shortly after becoming independent of the Irish province, the Dominican friars of Australia and New Zealand, at the invitation of the Holy See, entered into partnership with the Dominican sisters and lay associates to take on a mission in the Solomon Islands. Conditions now are quite different from what they were in 1956. Political independence, more widespread education, globalisation, mobile phones and solar panels have all had an impact on our life and work there. Dominican sisters and friars have gone beyond the original mission territory to all three dioceses of the Solomons. But the biggest change is in the personnel themselves: the sisters and - apart from a few specialised roles - the friars living and working there are now all locals. 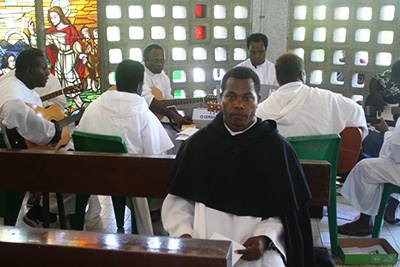 In 1980 the Order established a presence in Papua New Guinea when our Solomon Island students for the priesthood were sent for their studies to the seminary in Bomana, near Port Moresby. After four years of sharing quarters with the Marists, the fledgling community moved into a building of its own, dedicated to St Martin de Porres. This college - extended a few years ago - is now overflowing with young men from the Solomons and PNG who are offering their lives to bring the light of Christ to hearts eager to receive it.

If we simply list the works of the brethren in Melanesia, they sound like the works Dominicans undertake in Australia and in so many other parts of the world: theological education, chaplaincies at universities and schools, parishes, retreats, and so on. But a friar ministering in these parts experiences challenges and joys unknown in Australia or New Zealand, and carries out his Dominican apostolate in a truly Melanesian way. After 800 years, the Dominican charism continues to show its adaptability and relevance in the most diverse places and cultures.