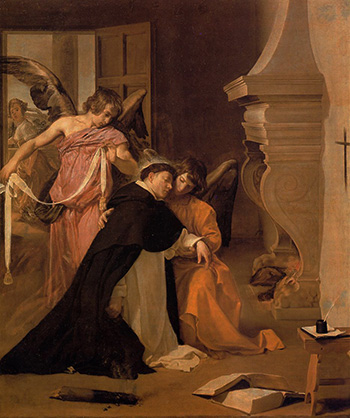 The Angelic Warfare Confraternity is a spiritual association of Christ’s faithful for the pursuit and promotion of the virtue of chastity. Its members are enrolled to receive assistance from God in the chaste life through the prayers of heavenly saints and earthly pilgrims. These prayers help the members of the Confraternity in the spiritual warfare they undertake while seeking to grow in the virtue of chastity. The Confraternity counts the Blessed Virgin Mary and St Thomas Aquinas as its principal patrons.

The Confraternity is an apostolate of the Order of Preachers (Dominicans), and is directed by the friars of the Order. It has existed in various forms from the fifteenth century, and was officially established in 1727 by Pope Benedict XIII, who placed it under the care of the Master of the Order.

There are three essential practices for those who seek membership of the Confraternity:

What is “angelic” about the Confraternity?

The Angelic Warfare Confraternity arose from devotion to St Thomas Aquinas. According to testimonies at his canonisation, he was aided in the virtue of chastity by two angels who tied a cord around his waist, saying, “On God’s behalf we gird you with the girdle of chastity, a girdle which no attack will ever destroy.” The cord itself (now located in a Dominican church in Chieri, Italy) has become a revered relic, which many visit to venerate and to pray for the grace of purity.

Membership is open to all people who are ready to seek healing and growth in chastity in their own lives and to foster the virtue in all circumstances.

How do I enrol?

For more information and to receive a membership pack, contact the promoter of the Angelic Warfare Confraternity for the Province of the Assumption, Fr James Baxter by completing the form below.

Please note that we are unable to accept applications from outside the Province of the Assumption (Australia, New Zealand, Papua New Guinea, and the Solomon Islands).